UNIT 2-NĀ ʻŌLELO A NĀ MEA ʻIKE HONUA: THE WISDOM OF THE WORLD 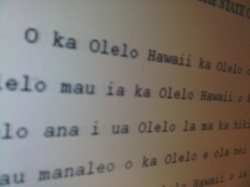 Language is an essential component in the development and transmission of human culture, society, identity and belief.  Although there are many competing schools of thought regarding the origins of language in the human species, most agree that language capability is one of the most distinguishing characteristics separating human beings from the rest of the world's species and is the root of culture, history and tradition.  The languages spoken in Oceania constitute almost 20% of the worlds' languages with approximately 1,000 indigenous languages for a population of less than 10 million.

For Hawaiians and many other societies in Oceania, the spoken word is extremely important.  Words have power to heal as well as harm, and carelessness can result in detrimental effects.  In this unit, we will explore some of the basic characteristics of Austronesian languages in Oceania with special attention to the Hawaiian language.  We will explore the role of language in the creation, maintenance and perpetuation of cultural traditions, paying particular attention to the connections between Hawaiian language and the natural environment.


Questions to consider:
Powered by